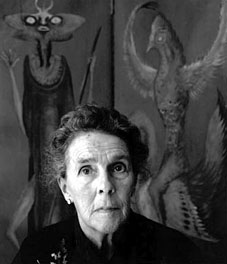 Leonora Carrington was born on April 6th 1917 in a small town called Chorley, Lancashire in the North of England. Her father was of Anglo-Irish decent and her mother was from the South of Ireland. Her father was a wealthy industrialist who's company was affiliated with ICI and produced artificial textiles. Her mother, an Irish beauty , was raised as a strict catholic. Leonora had three brothers, Pat, Gerard and Arthur. The Carrington family lived in a variety of mansions, first in Westwood, then in a mansion called Crookhey Hall ,that remains for her as a token of magic and mystery . Finally she also lived in Hazel Wood, which was later donated to Jesuits by her mother, after the war , to be converted into an old people's retirement home.
It was in these mansions, during her childhood, that Leonora was surrounded by beautiful woods as imagined in a fairy tale. Her Irish nanny, Ms Mary Cavanaugh, was central in her early upbringing, providing stories of all sorts many of them in Gaelic. In these surroundings of woods, horses and freedom, Leonora passed her first years of life. She would also travel frequently to Ireland to visit her grandmother with whom she was very close. During these visits to her grandmother, meeting the different townspeople, her Celtic roots were revealed.
Nevertheless, her freedom was soon taken away. At the tender age of nine she was sent to catholic convents for education and finishing. One of these convents, Newhall, had been a palace of Henry VIII, king of England. However, the three years she spent in convents was an indeed traumatic experience to her. She spent these important formative years in essence as an outcast, not fitting nor understanding the nuns and their strict rules nor the upper-class British establishment. This was crowned by her presentation in court at age seventeen. However Leonora was soon to rebel against the established rules, to become an artist in her own right.
﻿ ﻿ Her first encounters with art creation were when she was a small girl, and her mother brought her brushes and watercolors. After that she was presented with a set of oils by her mother. This started her in what was to be a brilliant artist's career. Opposed by her father, encouraged by her mother , but mostly self motivated and under the most difficult circumstances, Leonora decided to pursue her artistic career .
The decision to become an artist would result in a schism in her relationship with her father, who would have rather seen her become almost anything else, rather than an artist. Leonora, however, was not destined to heed her family's pressure to become a socialite. Soon after she was presented at court, convinced her mother to send her to Italy for art classes.
In Florence, as an adolescent, she would receive her first formal training in painting. Mrs. Penrose's Academy of Art was a school that consisted of almost private tutoring for young British girls of that time. Her experience in Florence, however, was to remain indelible and formed an important part of Leonora's formal training as a painter.
But a critical stage in becoming an artist came when she moved to London where she first attended the Chelsea School of Arts and then joined the painting Academy of Amédée Ozenfant in London. "His first painting class, " she says of Ozenfant," was to learn how to paint a door properly".
During her stay in London her mother presented her with the book of Herbert Reed on surrealism that had an illustration by Max Ernst on the cover, his painting "Deux Enfants Menaces Par un Rosignol". This was her first contact with surrealism. One of the students with Ozenfant was her friend Ursula Goldinger. She and her Hungarian husband Erno Goldfinger. introduced her to Max Ernst in London. She then reencountered Max Ernst in a trip she made to Paris. This is how she discovered the Surrealists. Here was a group of intellectuals who by some feat of magic had come together. It was a group formed by artists that would understand the type of art that Leonora was creating. In this group she met Breton, Tanguy, Peret, Belmer, Arp and so many others.
With Breton at the center they would meet many times in the Cafe des Deux Magot's, where other artists such as Picasso, Dali and others would join them. Many games, discussions and ideas were expressed in these meetings. Max and Leonora lived in Rue Jacob and would frequently see Picasso who lived a block away in Rue Saint Andre.
Unlike many painters in the surrealist group Leonora's work focused early on in the magical, the mystical and the mysterious. She was not alone, the "triumph of imagination" was the goal at the heart of the surrealist group.
This idyllic period in Leonora's life was not to last long, Nazi Germany was already threatening France and the Allies. Many of the surrealists including Leonora joined the Association of Artists (Kunstler Bund), an underground organization of intellectuals formed to help get Jews and artists that opposed Hitler, out of occupied Europe. 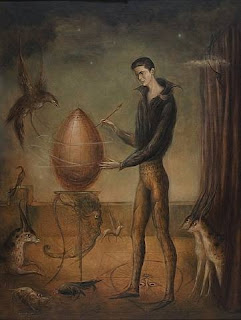 The French government issued an arrest of all German nationals in France, an edict that did not spare Max Ernst. Leonora who was at the time living with him went into a nervous collapse. She surfaced from this nervous episode only to be rudely awakened of having to flee for her life. Max Ernst was finally freed from prison thanks to the efforts of Peggy Guggenheim, with whom she left Europe for America.
Realizing the Germans were near, Leonora had to escape Europe immediately. She set her pet eagle free, and abandoned the house she had shared with Max in Saint-Martin L'Ardeche, leaving their paintings and sculptures behind. She headed for the Pirenees with some friends, the only way out of France and into Spain, with the Germans at their heels.
In Spain she had another collapse and her father sent an emissary from England to have her committed in Santander. The horrendous experience at this psychiatric hospital in Spain, along with her flight from France formed the core of her books Down Below and The Stone Door. Fear.
She was able, however, to escape the hospital and fled to Lisbon, taking asylum in the Mexican embassy to Portugal. Here the Mexican ambassador and the reporter Renato Leduc helped grant her asylum. Renato Leduc offered to marry her to help her escape Europe. As part of the diplomatic core to Mexico, Leonora and Renato sailed for New York in 1941 in one of the last ships to leave Europe before end of the War .
Once in New York she rejoined the Surrealists meeting with Duchamp, Breton, and others. Leduc, however, had to return to Mexico, so they traveled to Mexico in 1942. Leonora divorced Renato shortly afterwards, remaining his friend . In Mexico she again met with Breton, Peret, Alice Rahon, Wolfgang Paalen . At this time she met Remedios Varo, forming a close and enduring friendship with her. It was through Remedios that she also met Katy and Jose Horna as well as the photographer Chiqui Weisz. She married Chiqui in 1946 and had two sons with him, Gabriel and Pablo. Gabriel Has become a writer who teaches in the University in Mexico and Pablo, a pathologist, is also an artist, he lives in Richmond Virginia.
Leonora Carrington has spent many years in Mexico, a country that has offered her enormous inspiration , with its many legends and rich mythology. During her life in Mexico, she has created an enormous body of artistic work, creating hundreds of wonderful paintings, sculptures as well as writing her most important books. It is here that she becomes a true individual as an artist, to the point that she is now one of the most cherished artists in Mexico. Off and on she has lived in the United States first in New York City and in Chicago where she has also painted many of her most important works.
She is known throughout the world as one of the main pillars of surrealism. She has had many exhibits in Mexico City, New York, San Francisco, Paris, London , Munich and Tokyo. Her books are translated into more than six languages. 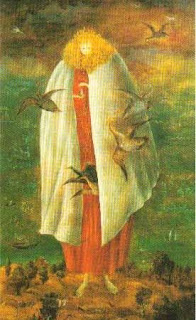 The paintings by Leonora Carrington are a key to the door that will lead us into the world of the onyric. Early on, using the tools of formal painting, she started to explore the intangible; that mysterious world called the world of imagination, the fantastic.
The Surrealist group hosted a variety of styles from the figurative, with artists like Delvaux, Magritte, Dali and Belmer; to the abstract, as seen in the work of Tanguy, Dominguez and Duchamp. But Breton, the founder of the group was always in pursuit of the fantastic. It was not surprising, therefore, that the surrealists welcomed Leonora in their midst. Here was an extraordinary creature, a "femme enfant par excellence". Little did they know the incredible originality this woman artist had.
It should not come as a surprise, therefore, that not until her arrival to Mexico was she to begin to develop her own world. Here she was now free to do evolve without restraints. In the process she has influenced many artists, including Remedios Varo and others that have come in contact with her work.
Many so called art critics have tried to seek the origins of her style, the response is simple, her style is her own. This is what makes her so unique in the world of art.
Leonora Carrington has always explored and searched with complete courage and complete honesty to herself. I have seen many explanations and interpretations of her imagery. I will not insult you, the viewer, by explaining a painting to you. What a painting means to me is not what it means to you. Please be welcome to explore and evoke your own symbolism by observing the paintings in these galleries.... 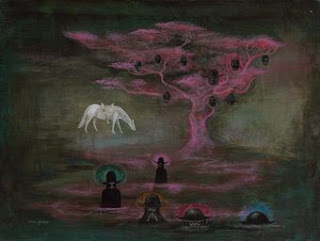 These are some of the Books Leonora Carrington has Written 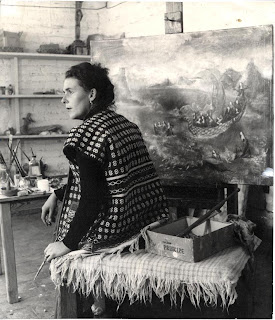 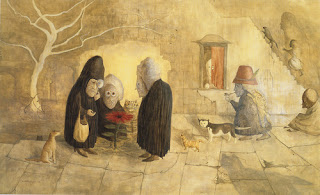 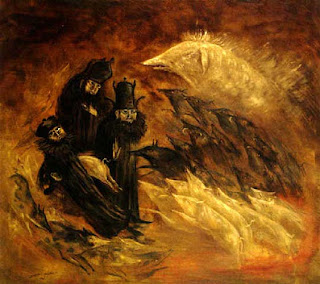 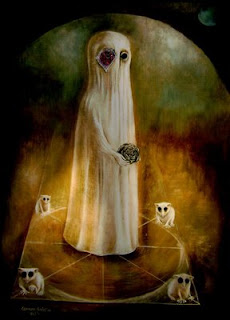 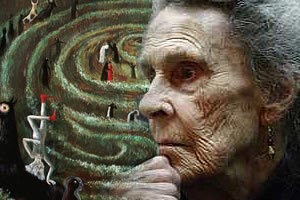 Leonora Carrington, is possibly my most favorite artist of all time. I cant describe how much I idolize her. I know you should never meet your idols, but I'd love to meet her. I don't think I would be disappointed.
Her life and her art is amazing, its so surreal. I've read one of her books, 'The Hearing Trumpet.' It was excellent. I cant wait to read her other books, if I can get my hands on them.
Posted by Emily Robards at 2:22 PM