I had always hoped to meet Leonora at some point in my life, maybe in the next life. She was and still is a great inspiration to me, and will be greatly missed.
(Thank you to the person who left the anonymous comment about her passing in a previous post.)

"You may not believe in magic but something very strange is happening at this very moment. Your head has dissolved into thin air and I can see the rhododendrons through your stomach. It's not that you are dead or anything dramatic like that, it is simply that you are fading away and I can't even remember your name."
— Leonora Carrington (The Hearing Trumpet)

Leonora Carrington, who has died aged 94, led a life almost as picaresque and surreal as her art; born in Britain, she eloped with Max Ernst, hung out with Picasso and Dali, fled the Nazis, escaped from a Spanish psychiatric hospital and later settled in Mexico, where she built a reputation as one of the most original and visionary British artists and writers of the 20th century. 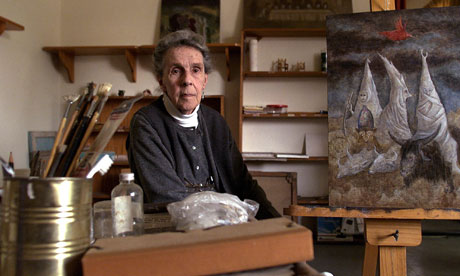 "We went down into the silent garden. Dawn is the time when nothing breathes, the hour of silence. Everything is transfixed, only the light moves."
— Leonora Carrington

In her memoir, Down Below (1944, revised 1988), she described how, after Ernst was interned by the French and then by the Nazis, she had a nervous breakdown, refused to eat and fled to Spain, where she was incarcerated in an asylum. The events described — brutal institutional therapies, sexual assault, hallucinatory drugs and indescribable filth — are horrifying, but it was never clear what was real and what surreal.

In the earlier version she describes a sexual assault by a gang of Spanish soldiers whose attempts at rape she fends off heroically until they finally give up, exhausted; in the amended version, the soldiers rape her “one after the other” before casting her out alone.
Some have suggested that at least some of the stories should not be understood literally but as magic realism — a response to her own mental state and events at the time. The sense of a hybrid world (half recognisable, half fantasy) was characteristic of her playful and vividly coloured paintings as well, many of them populated by strange and slightly menacing figures — elongated women in big cloaks, many-armed lizard-snakes, creatures half-human-half-wolf, people turning into birds, faces within bodies — often combined with arcane occult or religious symbols.
Leonora Carrington built up a massive international reputation, especially in America and Mexico, but in her native Britain she was comparatively neglected — last year saw the first major exhibition of her work in Britain for 20 years — despite her acknowledged importance as one of the few female exponents of Surrealism.
The only girl in a family of boys, Leonora Carrington was born on April 6 1917 at Chorley, Lancashire. Her father was an Anglo-Irish Protestant textile magnate, her mother a Roman Catholic beauty from southern Ireland. The family home was a rambling gothic mansion called Crookhey Hall, a house whose sinister towers, chimneys and gables feature in some of her paintings. As a child she was looked after by an Irish nanny, who gave her a love of Irish folklore.

School discipline came as a shock, and she was expelled from one Roman Catholic convent after another due to her “eccentricity, usually a combination of anti-social tendencies and certain supernatural proclivities”. The one thing she did learn was a love of art. Her father was not keen on her going to art school (artists live in garrets and die of starvation, he said), but her mother intervened and she was allowed to study at Mrs Penrose’s Academy of Art in Florence. There, she was exposed to the Italian Renaissance masters, whose love of rich colours were to inspire her later work.
She returned to England brimming with enthusiasm, but her father insisted she prepare for a conventional role in life by doing the Season. A ball was held in her honour at the Ritz, and she was presented to George V in an agonisingly tight ostrich feather tiara that she threatened to rip off.

A few years later, in a short story called The Debutante, she fantasised about a girl who befriends a female hyena at the zoo and decides to have it take her place at her debutante ball. The debutante assists in preparing a disguise for the animal, becoming a willing accomplice in the murder of her maid, Mary, whose face the hyena wears after eating the rest of her. The hyena reappeared in a 1937 self-portrait, along with two other figures from her short stories — a wild white horse and a white rocking horse.
Leonora attended the Chelsea School of Art, then joined the London academy of the Cubist Amédée Ozenfant. One of her fellow students was Ursula Goldfinger, wife of the Hungarian revolutionary architect Erno Goldfinger; it was at one of the Goldfingers’ dinner parties that she first met Max Ernst, who was in London for an exhibition.
Ernst was 46 and already married, but even before they met, the 19-year-old Leonora knew from his paintings that they were destined for one another. The following year she ran away to Paris to live with him in rooms on the rue Jacob.
Their life was complicated — Ernst was still spending time with his wife — but Leonora plunged recklessly into Surrealist Paris life. At one smart party she arrived wearing only a sheet, which she dropped at an opportune moment; she sat at a restaurant table and covered her feet with mustard, and served cold tapioca dyed with squid ink to guests as caviar. Visitors to the rue Jacob might wake up in the morning to a breakfast of omelette full of their own hair which she had cut while they slept.
She got to know Picasso and Bunuel (“uncouth Spaniards”), Dali, Man Ray, Miro, Breton, Tanguy, Peret, Belmer, Arp and many others. With her wild, dark beauty she looked the perfect submissive “femme enfant”, but she rejected the notion of being anyone’s muse (“all that means is that you’re someone else’s object”) and was quick to snap if anyone took her for granted.
When Joan Miro gave her some money and told her to get him some cigarettes, she told him to “bloody well” get them himself. Dali won her approval by calling her “a most important woman artist”, and her work was shown at exhibitions along with the work of Meret Oppenheim, Remedios Varo, Eileen Agar and other women.

In 1938 Ernst finally left his wife, and he and Leonora moved to Provence where, in addition to painting, she began to write stories. She contributed to André Breton’s Anthology of Black Humour, first published in 1939. But on the outbreak of the war, Ernst, a German, was arrested as an enemy alien by the French. Freed for a short while, he was soon interned again by the Germans after the invasion of France for practising “degenerate art”.
At the age of 23, abroad and alone, Leonora Carrington had a mental breakdown. “I wept for several hours, down in the village,” she recalled. “Then I went up again to my house, where for 24 hours I indulged in voluntary vomiting induced by drinking orange blossom water and interrupted by a short nap.” A trip to Spain in search of a visa for Ernst ended in her incarceration in a Spanish mental institution, where she was treated with Cardiazol, a drug which induced spasms and hallucinations.
A short biography in one of the collections of her fiction included the gloriously unlikely sentence: “Subjected to horrifying treatment in a Madrid asylum, she was rescued by her nanny who arrived in a submarine.”
The facts are equally bizarre: Leonora’s father sent a business contact to get her out of hospital and put her on a ship to South Africa; the plan was to have her admitted to a sanatorium there. But, waiting for the boat in Lisbon, Leonora gave her minders the slip, jumped into a taxi and said the first thing that came into her head: “Take me to the Mexican embassy!” One of her friends in Paris had been a Mexican diplomat, Renato Leduc, a friend of Picasso’s, who was now in Lisbon.
His solution to her predicament was to marry her and take her to America. While they were waiting in Lisbon for the boat to the United States, Ernst arrived in town, having escaped from internment, with the art collector Peggy Guggenheim (whom he would later marry) in tow, along with her ex-husband, Ernst’s ex-wife and a collection of children.
This somewhat awkward situation marked the end of Leonora’s relationship with Ernst and, it seems, of her memories of their relationship. “You haven’t asked me about my sex life with Max,” she challenged an interviewer, years later. The question, when it came, only prompted the vague reply: “I can’t remember, but it was probably common garden variety sex.”
After a few months in New York, Leonora and Leduc dissolved their marriage and she moved to Mexico City, where, a few years later, she met and married, Csizi (“Chiki”) Weisz, the Hungarian Surrealist photographer.
With its Aztec and Mayan history and its cult of the dead, Mexico suited Leonora Carrington, giving her new inspiration and a new circle of friends, among them Frida Kahlo and Remedios Varo. Varo became her confidante, and together they experimented with alchemy, the Kabala and the teachings of the Popol Vuh (the sacred book of the Maya).
The two women explored the magic within women’s domestic lives in their paintings, and Leonora celebrated their friendship in The Hearing Trumpet (1976), a novel about an elderly lady whose family conspire to pack her off to an institution run by the Well of Light Brotherhood, who are “financed by a prominent American cereal company”. The old lady’s friend, Carmella, who gives her the gift of a huge hearing trumpet which enables her to listen in on the plot, is thought to be based on Varo.
The story pokes fun at an earlier generation of male Surrealists: “Even Buckingham Palace has a large reproduction of Magritte’s famous slice of ham with an eye peering out. It hangs, I believe, in the throne room.”
Leonora Carrington’s great patron was Edward James, who arranged her first solo show at Pierre Matisse’s gallery in New York in 1947. By 1960 she was well known in Europe and Mexico, and that year a retrospective of her work was held at the Museo Nacional de Arte Moderno in Mexico City.
By that time, she was not only painting, but had created tapestries, collages and sculptures and written articles, stories, essays and poetry as well.
Though she lived for spells in New York and Chicago, she remained in Mexico City for the rest of her life, though in her colourful turn of phrase (“like a hen on a hot griddle”) she retained the Irishisms of her youth.
Leonora Carrington, whose death was announced in Mexico on May 26, was appointed OBE in 2000.
Her husband predeceased her in 2007, and she is survived by their two sons. Posted by Emily Robards at 3:07 PM