Hieronymus Bosch, born Jeroen Anthonissen van Aken (c. 1450 - August 9, 1516) was an Early Netherlandish painter of the fifteenth and sixteenth centuries. Many of his works depict sin and human moral failings.
Bosch used images of demons, half-human animals and machines to evoke fear and confusion to portray the evil of man.
His works contain complex, highly original, imaginative, and dense use of symbolic figures and iconography, some of which was obscure even in his own time.

Posted by Emily Robards at 9:37 AM No comments:

Director Joseph Mann opts for puppets instead of computer graphics in this somber video for “Small Hands” by Keaton Henson. The results are pure magic.
Posted by Emily Robards at 12:15 PM No comments:


Some great work from the New York based Artist, Christian Johnson. 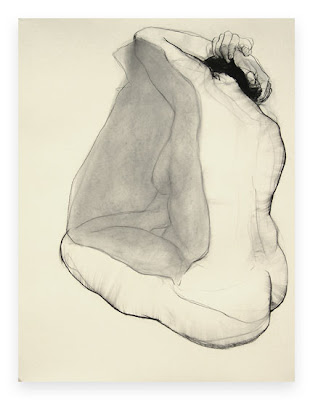 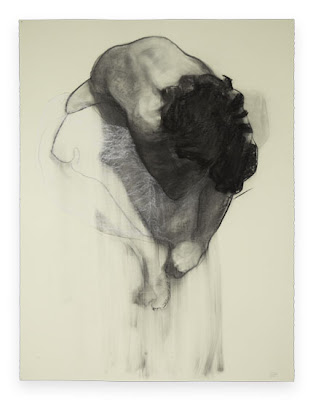 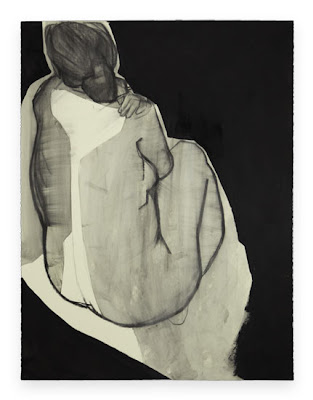 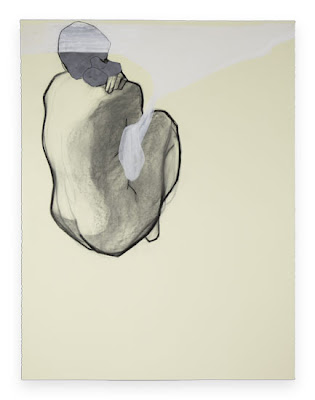 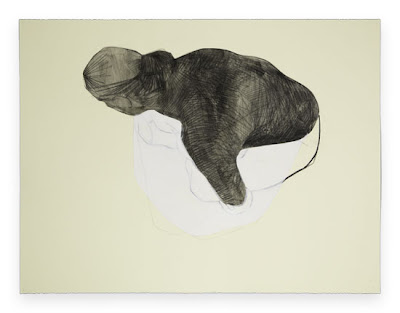 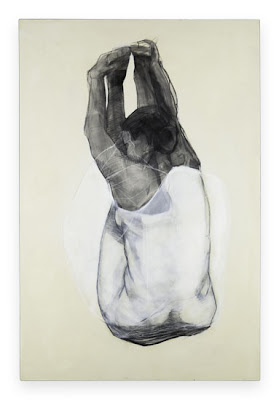 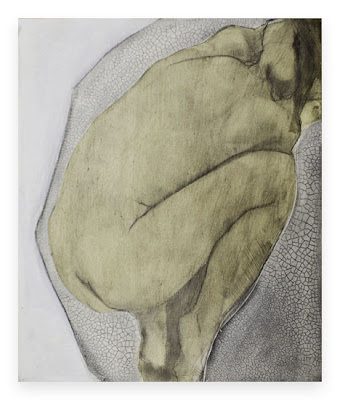 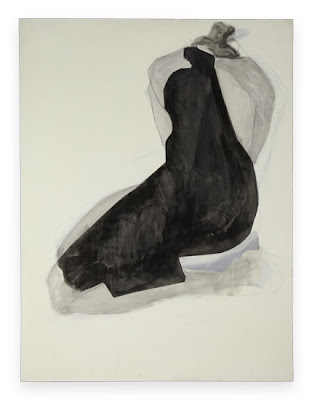 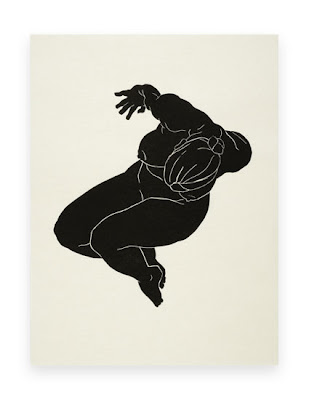 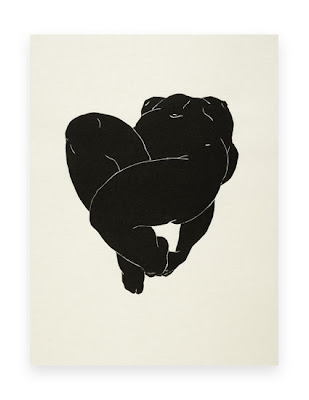 Mendieta's powerful and haunting images combine's the 1970's concepts of earth art and body art with her ethnic heritage. Theses pictures are her 'Silueta' works. Created in Iowa and Mexico, the 'Silueta' sculptures themselves are transitory, done with such materials as earth, flowers, leaves, fire or blood, so the documenting photographs are considered Mendieta’s art. She is considered a pioneer in environmental and performance art.

One beach sculpture (above), consists of red bouganvillea blossoms in the shape of the artist’s body with arms raised. The incoming waves have washed away the lower part of the figure. For those familiar with Santeria, the symbolism is clear: Chango, a principal orisha, always is represented by the color red. His mistress is Yemayá, orisha of the ocean, whose frothy waves represent her lacy petticoats. Mendieta’s art shows Yemayá’s petticoats covering the legs of Chango, whose arms are raised in surprise or delight. Like the ocean, Yemayá represents both a loving and wrathful mother; they say you can take shelter from your enemies under her skirts, but if you provoke her anger, there is nowhere you can hide.

Other photos show the artist’s body outlined in fire, vines, stones—even the mud of a riverbank. One of the most reproduced works of the “Silueta” series shows Mendieta herself, nude and covered with mud and leaves, standing against the trunk of a large tree, her body blending in perfectly with its rough bark. (left)

Mendieta was only 13 when she and her sister were taken to the Havana airport by their parents and bundled off on a plane bound for Miami, two of the thousands of youngsters who escaped the Castro regime under Operation Pedro Pan. Writing about her “Silueta” series in 1981, Mendieta stated that she has been “carrying on a dialogue between the landscape and the female body (based on my own silhouette). I believe this has been a direct result of my having been torn from my homeland during my adolescence.”

I was introduced to her via our Art History lecture today, according to our lecturer, who showed us the beach image above, she was saposed to be picturing her own death, but after doing my own research, I dont believe that to be entierly true.
Posted by Emily Robards at 5:31 PM No comments:

This dry point was originally meant for the collaborated print, but I wasn't happy with how they were put together, so I printed them on their own. I will probably go back and water colour one or two of them..﻿

Posted by Emily Robards at 12:42 PM No comments:

A friend of mine, Dawn West made a mono print from a branch. After admiring it, she was kind enough to give it to me, so we decided to collaborate together making a whole new image. I created a dry point (below), in hopes to compliment the already made print.
I'm not sure if I am happy with it, originally I had it turned the other way (second print down.) But after turning it on the computer (below) I am much happier with it.
The girl is done in a dry point, and is actually a ghost print, meaning its the second time being run through the press after inking. I may colour the girl with water colours but I am not sure, I don't want to ruin it as it is a one off. Any comments or suggestions would be greatly appreciated!

Another unsuccessful print. I prefer the drawing in my sketchbook, its probably one of those images that needs to stay in pen. I didn't leave the image in the acid long enough, so the line is soft and weak. Also I couldn't get the background clean, so its cloudy with ink. Very annoying!

Posted by Emily Robards at 2:41 PM No comments:

This is an etching I did. After etching the image onto the plate, I covered the image with bichamen, and left it in the acid allowing the background to drop.
I am not very happy with how it turned out, I originally wanted it to be all white in the background, but was unable to wipe all of the ink off around the edges. So I then gave in and inked up the whole plate, but the background is uneven and messy.
I will probably go back and print it up again, trying to keep the background as white as possible. We shall see. I'm a bit fed up with it at the moment and am ready to move on. Unfortunately the image didn't seem to come up very well on the scanner but If you click on it it should pop up and be a bit more clearer.

Posted by Emily Robards at 2:28 PM No comments:


Some pictures I found of Palette's belonging to famous painters.....I always imagined Vincent Van Goghs to be a lot brighter tho...

Posted by Emily Robards at 1:22 PM No comments:

So, as you know there are more ways to creating art than, just creating an image, whether its 2D or 3D, there is also cooking.
I have really started to enjoy cooking, even though I am someone who is very wary of what I eat and how much, est. but I am cooking for two,so nothing goes to waste.
So I have decided to add these cooking adventures to my blog, using recipes out of the back of the Sunday Telegraph Magazine, or where ever I may find them. They will not be frequent, if one is lucky maybe once a fortnight. Its something I had already started and I regret not documenting the results, but they were so good that I am sure I will be doing them again. The pictures of my food may not be great but I will try an include pictures from the actual magazine as well.

This  recipe serves 4, The dough makes 4 half moon breads, but I would recommend making eight as they are quit big.


1 quantity of flat bread, allowed to rise for an hour
4 heaped tbsp of fresh goats cheese
4 slices of prosciutto
8 olives, pitted and sliced.
(the recipe calls for 8 olives, but I added a lot more ﻿cutting them into quarters, it depends on you.)
8 basil leaves

1. Beat together the egg, olive oil, and 200ml of luke warm water

2. Put the yeast, a tsp of salt and the flour﻿ into a large bowl or mixer, and slowly add the liquid. (it really helps if you have a proper mixer, I have my mums old super chef, which only has one speed, super fast, it has a special claw for bread, it really makes life alot easier!)

3. Knead for up to 10 minutes until the dough is very smooth and elastic.

6. Place the dough on a well floured surface and kneed the fresh coriander into the dough by folding, turning, and refolding until the herbs are well distributed.

**At this point you can starting rolling out the dough for the half moons, (see below) but I will give you the rest of the recipe in case you want to make actual flat bread!******

7. Divide into 12 pieces and stretch each into a slim oval.
8. Lay them on an oiled baking sheet and leave to rise for 20 minutes.
9. Bake for eight minutes until puffed and slightly coloured.

1. For each half moon take a piece of dough the size of a squash ball and roll or stretch into a circle measuring 15cm in diameter.

2. Place on a floured board, and put a tablespoon of goats cheese, a slice of prosciutto, a few olive slices and a couple of basil leaves in one half of the disc.
(You don't have to be true to the recipe when adding the fillings, I always tend to add a bit more. Also I didn't have whole Basil leaves, but the chopped and bottled stuff works just as good, just sprinkle on as mush as you think, but don't be timid about it!)

3. Fold the other half over to make a semi-circle, and press down firmly to seal the sides together.
It is important that the parcel does not leak, so mend any tears by pinching the edges together.

4. Brush with oil and placed on an oiled baking sheet.

5 Bake for twelve minutes until and well browned.

6. For a richer and dough-nutty result, you can fry the half moon breads in a centimeter of cooking oil until golden, Either way eat warm. Although they are jolly good cold!
(I didn't fry mine, but I am pretty sure they did in the magazine, judging by the picture.)

You can see my pictures below, they are not very good quality and I will try and do better next time!

Posted by Emily Robards at 11:55 AM No comments:

Email ThisBlogThis!Share to TwitterShare to FacebookShare to Pinterest
Labels: Cooking

Houses For a posh bird...

We had some old ceramic tea pots in the shed, They are very pretty, but were never going to be used. My mum picked them up from somewere at her work. Anyway I decided to turn them into bird houses. I fild them with dry compost, feathers and moss. The teapot lids have been tied to the top so they slightly cover the opening. We tied them up in the trees hopefully far enough away from the cats. Nesting season hasent strarted yet, but hopefully someone will be keen on them and decide to make them their home. Maybe a little wren or Blue tit?
The last two photos are a bit blurred as I coudent get near enough to it to take a clear picture! 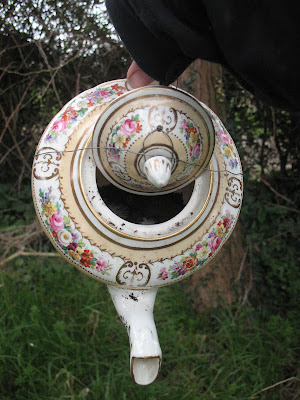 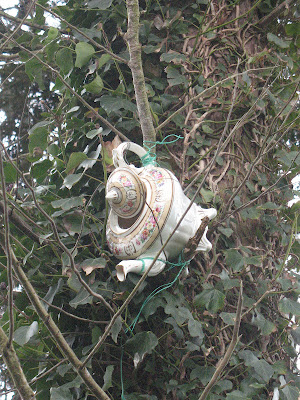 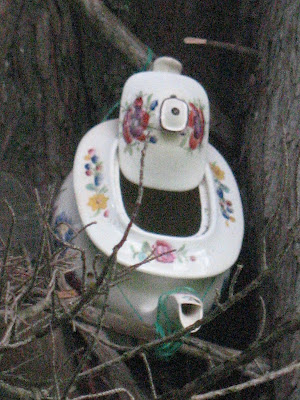 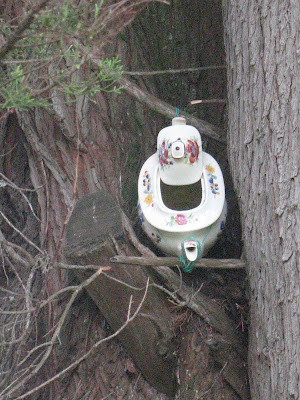 Posted by Emily Robards at 9:21 AM No comments:


A site I found of famouse paintings which have been greatly improved by an orange cat. Mona Lisa is my favorite. I dont know who the author is unfortunatly, but it is from the sad and useless website.

Posted by Emily Robards at 9:32 AM No comments: