Tacita Dean's work, especially her video work has popped up a good bit through out my college education. I have never truly switched on to her until I saw a documentary on her via Lily Cole's tv series  Art Matters, on sky arts. I cant say Lily Cole is the best interviewer but if you can look past her, watching the artists talk about their work and show the public what they love is a most enjoyable experience. There is  nothing better than learning about the artists work in their own words than through a critic or third party publication.
'Best known for her work in 16mm film, Dean laments the obsolescence of her medium in the digital age and speaks about her campaign, backed by Martin Scorsese and Jean-Luc Godard, to encourage film directors to continue to use film today.'
Her films are beautiful and poetic. A lot of Deans work is a creation of chance. For example her film 'Green Ray' The last ray of the dying sun.. Something that could not be captured digitally but Tacita Dean managed to capture it on film


green ray by tacita dean from veronika fee on Vimeo.

Tacita Dean: In America they call it the green flash. When the sun sets, in a very clear horizon, with no land mass for many hundreds of miles, and no moisture or atmospheric pressure, you have a good chance of seeing it. The slowest ray is the blue ray, which comes across as green when the sun sets in perfect atmospheric conditions. It’s the last ray as the sun recedes with the curvature of the earth. Like a pulse on the horizon. It’s totally fractional, though it can last longer. 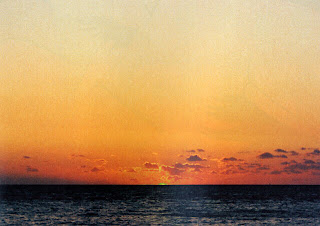 The bizarre thing is that I filmed The Green Ray in Madagascar, and then in the same month, I had to fly back from Washington for an exhibition. On my Lufthansa airplane back, while we were nearing the coast of Ireland, everyone else was asleep and I got up and looked out the window across three sleeping bodies, and just at that moment the sun rose above a very sharply defined cloud, and it was the most extraordinary green ray. I mean, not like the one I have on my film, I mean a real . . . and it lingered . . . a second of emerald before the sun rose. I was so shocked, having this whole wait for it in Madagascar and then actually getting to see it so vividly. To see such a full-blooded green ray—

I am a particular fan of her chalkboard drawings especially her series 'Fatigues.'

'Fatigues, 2012 are a series of dramatic, large-scale chalk on blackboard drawings, made by Dean over many weeks on the site of a former tax office in Kassel. Dean used the two-story space to create a natural sequence of events within the narrative of the drawings. Beginning on the upper-story with the soaring and infamous mountain peaks of the Hindu Kush and the glacial source of the Kabul River, she used the gravity of the space to show the river descending towards Kabul as the snows melt and the rising water bring the annual floods that are both welcomed and feared.
The drawings mark a return to blackboards after a ten year gap, which, Dean explains, came about when her attempt to make a ‘blind film’ in Afghanistan, directing a local cameraman from afar, came to nothing. It was her chance discovery of the jingoistic poem, ‘Ford o’ Kabul River’ by Rudyard Kipling, about the drowning of British hussars in the Second Anglo-Afghan War, combined with footage of a flash flood in Kabul (from the damaged Afghan film) which led Dean to think about the passage and power of the Kabul River. The title, ‘Fatigues’ is both reference to army uniform and Dean’s state post-Turbine Hall.' -Marian Goodman Gallery 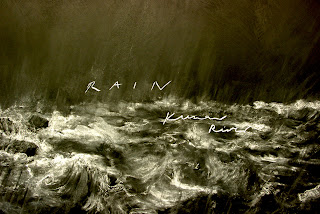 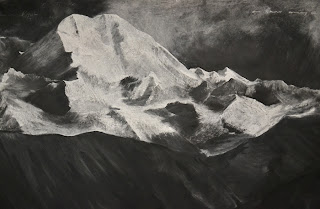 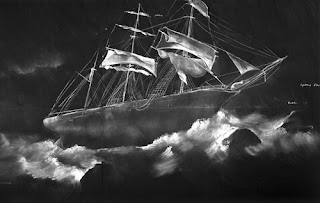 The above image is from her series 'the Roaring Fortise'