Last week the girls and I went up to Dublin to see a few exhibitions. The best of them was the Ben Rivers exhibition in the Douglas Hyde. Simone Kappler was also showing.
Using old 16mm cameras, Ben Rivers creates work from stories of real people, often those who have disconnected from the normal world and taken themselves into wilderness territories
Ben Rivers built a large tin shack, in which he showed his film Ah! Liberty. A twenty minute film shot on 16mm black and white film. (see below) 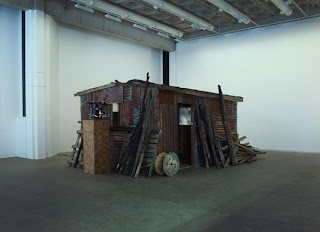 “To name an attitude black and white suggests reduction, but in this rural, ethnographic portrait the artist unravels a thousand tones of each. How long does it take until this overflowing bath becomes a lake, until the simple forest drive (there is nothing simple here) transforms these children into airborne angels of light? There is a tender brutality at work here, nothing is polished or smooth or well rounded, instead the adventure of seeing is undertaken ready to fall and bruise, to be wounded by its search. And it is from this necessary wound that the artist joins in with the life of a family grown wild out of doors with the horses and chickens. For its compassion, its refusal of the sentimental, its quick witted montage and dramaturgy of the everyday, the Tiger Award goes to Ah, Liberty!” (Jury Statement, Rotterdam International Film Festival 2008)
A family’s place in the wilderness, outside of time; free-range animals and children, junk and nature, all within the most sublime landscape. The work aims at an idea of freedom, which is reflected in the hand-processed Scope format, but is undercut with a sense of foreboding. There’s no particular story; beginning, middle or end, just fragments of lives lived, rituals performed. "

I first discovered Ben Rivers work when we were shown his film Two Years at Sea.An 88 minute film shot on 16mm black and white anamorphic film shot up to 35mm.
The film is silent except for the occasional music played by the main character Jake and the gentle rustling and scuffling of him going about his daily activities.
Jake is a hermit who lives alone with his cat in the Scottish Highlands. Its a film that's well worth looking out for, something to be watched on a dark winters evening in front of the fire.

"A man called Jake lives in the middle of the forest. He goes for walks in whatever the weather, and takes naps in the misty fields and woods. He builds a raft to spend time sitting in a loch. Drives a beat-up jeep to pick up wood supplies. He is seen in all seasons, surviving frugally, passing the time with strange projects, living the radical dream he had as a younger man, a dream he spent two years working at sea to realise. "

TWO YEARS AT SEA - TRAILER from Ben Rivers on Vimeo. 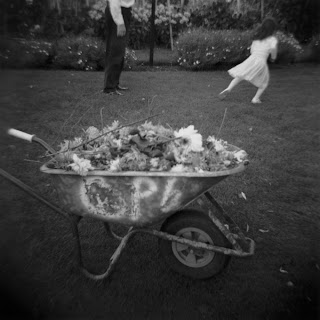 Simone Kappler was also showing in the Douglas Hyde that day. She had a series of photographs taken around Dublin using a Diana camera. The above image was my favourite taken in the botanic gardens.
Posted by Emily Robards at 12:10 PM