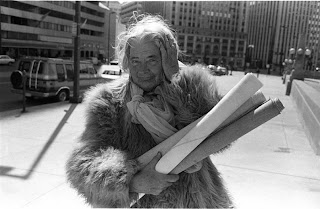 For nearly three decades, until shortly before her death in 1994 at the age of 85, Lee Godie lived, homeless on the streets of Chicago. She has been described as colourful and unpredictable, she was likely to appear wrapped in a toga and fur coat one day or in a full safari regalia the next.
No one knows quite how she came to be on the streets of Chicago. Some say there was a marriage breakdown, other believe she may have been traumatised by the loss of a child or children. What is known for sure is that Godie had at least one daughter, Bonnie Blank, who found her mother in 1988. It took several months before Blank revealed her identity to her mother. Soon afterwards Godie was diagnosed with dementia, she went to live with her daughter until she died three years later. 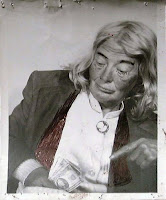 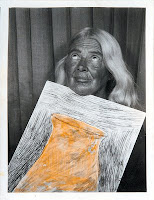 Lee Godie was a local character often seen sketching and painting on the steps of the Art Institute of Chicago, or sprawled on the marble floor of the library drawing.
It seemed implausible to some then, that her art might one day hang in galleries such as the Art Institute, but today Godie is now finding growing international acclaim. Today her work hangs in private collections across America and is held by the Smithsonian. 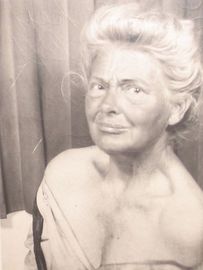 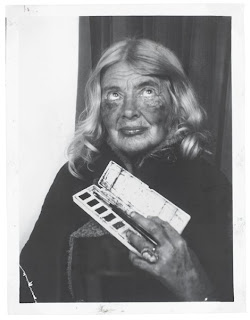 Lee Godie was an Outsider artist. 'Outsider Art,' is a term coined by the British art critic Roger Cardinal to describe artists living on the fringes of society. Like Godie most outsider artists are untrained, unaffected by social conventions and untouched by the machinations of the commercial art world. Only recently are outsider artists receiving increasing attention from the public and art world. 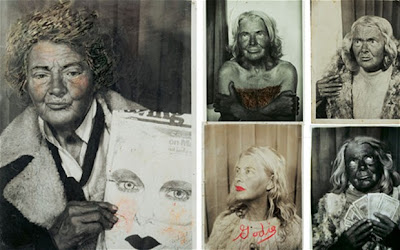 Only a fraction of Godie's work is gallery worthy. In her decades on the street she made and sold several works a day, simply to survive. She worked across several disciplines, unsing virtually any material she could find, from the conventional (canvases) to the bizarre (window shades), and was known for paintings and drawings that revealed a fascination with 1920s-era beauties. But it was her photographs, taken in a photo-booth in a Chicago bus station and featuring goodie in a various guises, these are her most highly regarded, inventive work. Some of the images have been partially erased, others have been drawn on with pen or paint. Most involve props bought from Woolworth's with the proceeds of the previous day's sales. Today her work, once sold on the streets for $30 no fetches $15,000.

One of the biggest misconceptions about Godie was that she was poor, apparently she was quite the business woman.  She would have her canvases half uncurled, if she was interested in selling to you, she would let the canvas open up so you could see more. If she didn't like you she would curl it up the other way (my kind of lady!) She had an astute business sense. The biggest issue for Godie was how to keep her money safe, she solved this by using stores as 'banks.' Ultimo was the best at that time, the manager would kindly hold her money for her until she returned to collect it. 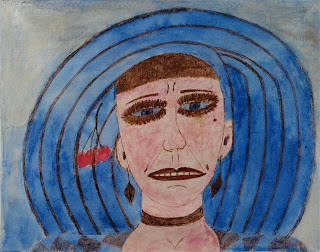 There can be little doubt that many of those who collect Godie's work do so because they knew her an loved her as much as her art. Her images have been described as powerful on a number of levels, I think this would be more for her photographs rather than her drawings. Her photographs are as gripping as works by any trained photographer.

Posted by Emily Robards at 5:10 PM