A couple of weeks ago a friend and I took a road trip to Lismore to see a newly commissioned work by Dorothy Cross, titled Eye of Shark. It opened in conjunction to her exhibition, View at the Kerlin gallery in Dublin. Unfortunately the work was not exhibited in the castle itself but in the small chapel called St Carthage Hall, in the centre of the town hidden behind the heritage centre.
It was a lovely installation, very interesting but you would want to have other plans for your day if you were to drive all that way to see it.
The installation consisted of nine re-claimed cast iron bathtubs which were arranged in lines down the centre of the church.

These bathtubs were not the sort you would find out in the fields as make shift water troughs or that you would find in an ordinary old house. These tubs had a sense of grandeur about them, in their heyday they would have bathed the sort of persons depicted in films such as the Great Gatsby.
They were beautiful and deep, you could get lost in them.
I would love to know were she found them, I assume they were remnants of the burnt out manor houses of Ireland.

Each tub was lined with gold along the scum line, where the dirt normally accumulates, this suggested an alchemical transformation from dirt to gold. A line from the press release for the exhibition illustrates this so beautifully,

'This line of gold lies at the place where air meets water and beneath the surface of water,
below the depths, is home to shark.'

The bathtubs or 'congregation' are facing a small opening in the far wall which has been sealed with an opaque red glass, 'a gilded vessel'. The literal eye of a shark is housed within, gazing upon the congregation, yet hidden from view.
The title of this exhibition, Eye of Shark, takes reference from many sources including Macbeth (…in the cauldron boyle and bake, eye of newt and toe of frog…), the Eye of Providence (the all seeing eye of God) and the fear of the unknown that is invoked in us by the presence of the shark.

As in her exhibition View, Surrealism and the concept of the found object were very strong in this exhibition. It shows that you don't need to physically make something to express an idea but can use what is already in the world around you, this form of creation is just as successful as if you painted a picture. Turning to the everyday can only bring art and life closer together.
The artist Annette Messenger said that, 'Mostly I believe an artist doesn't create something, but is there to sort through, to show, to point out what already exists, to put it into form and sometimeS reformulate it…..' - Annette Messenger, Word for Word, 2006 (The Everyday, Documents on Contemporary Art)

I do not think this installation would have worked anywhere else except in a church. The presence of being in a mediative building forced one to whisper and to observe quietly. Taking in everything the work had to offer, the bathtubs could have almost been human, kneeling in quiet contemplation or prayer. Again Dorothy Cross has out done herself and inspired me to make work and be more observant of the objects and world around me.
Unfortunately my photos are not very good, I think its time for a new camera. I am trying to take less photos now and taking more time to look at works and to take them in. Now I'm just taking photos as documentation or observations of texture or the way works are hung. When I get a bit braver I will go back to sketching things out in my sketchbook as I find this exercise allows things to stay in the mind better and you tend to take more in, even if it takes more time to get through a gallery.
Please see what photos I have below. 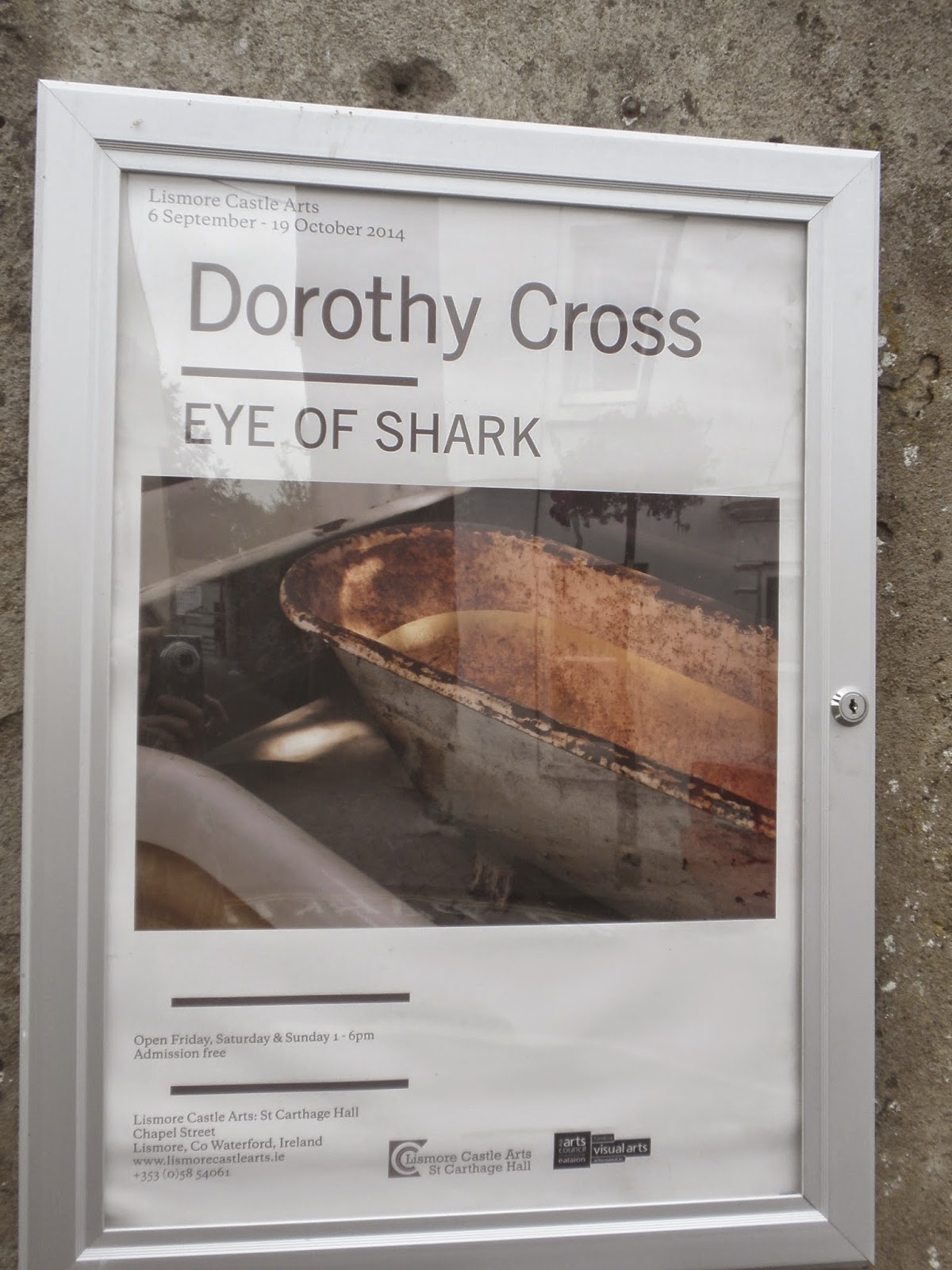 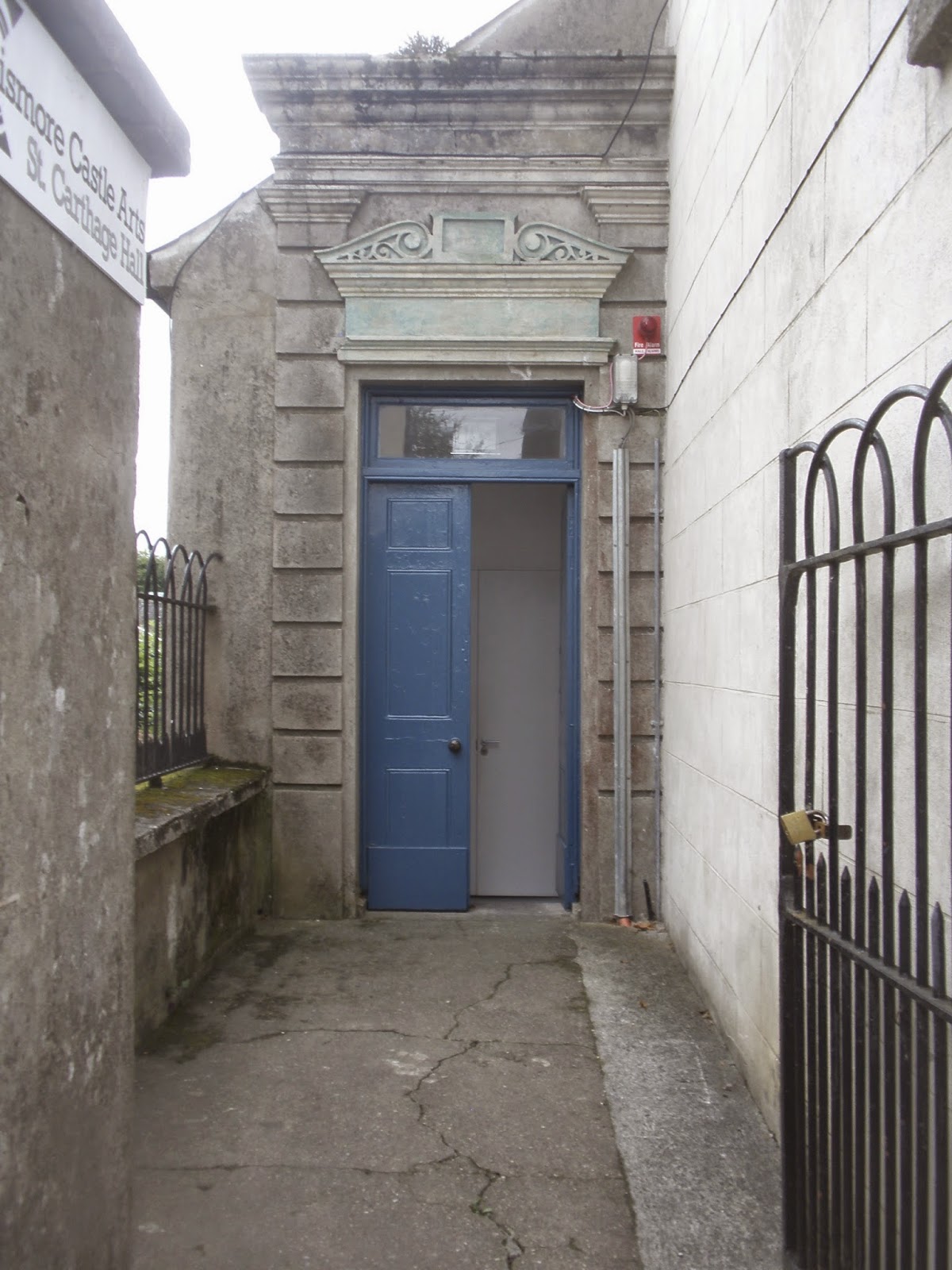 The tiny entrance to the chapel, easily overlooked by the untrained eye. 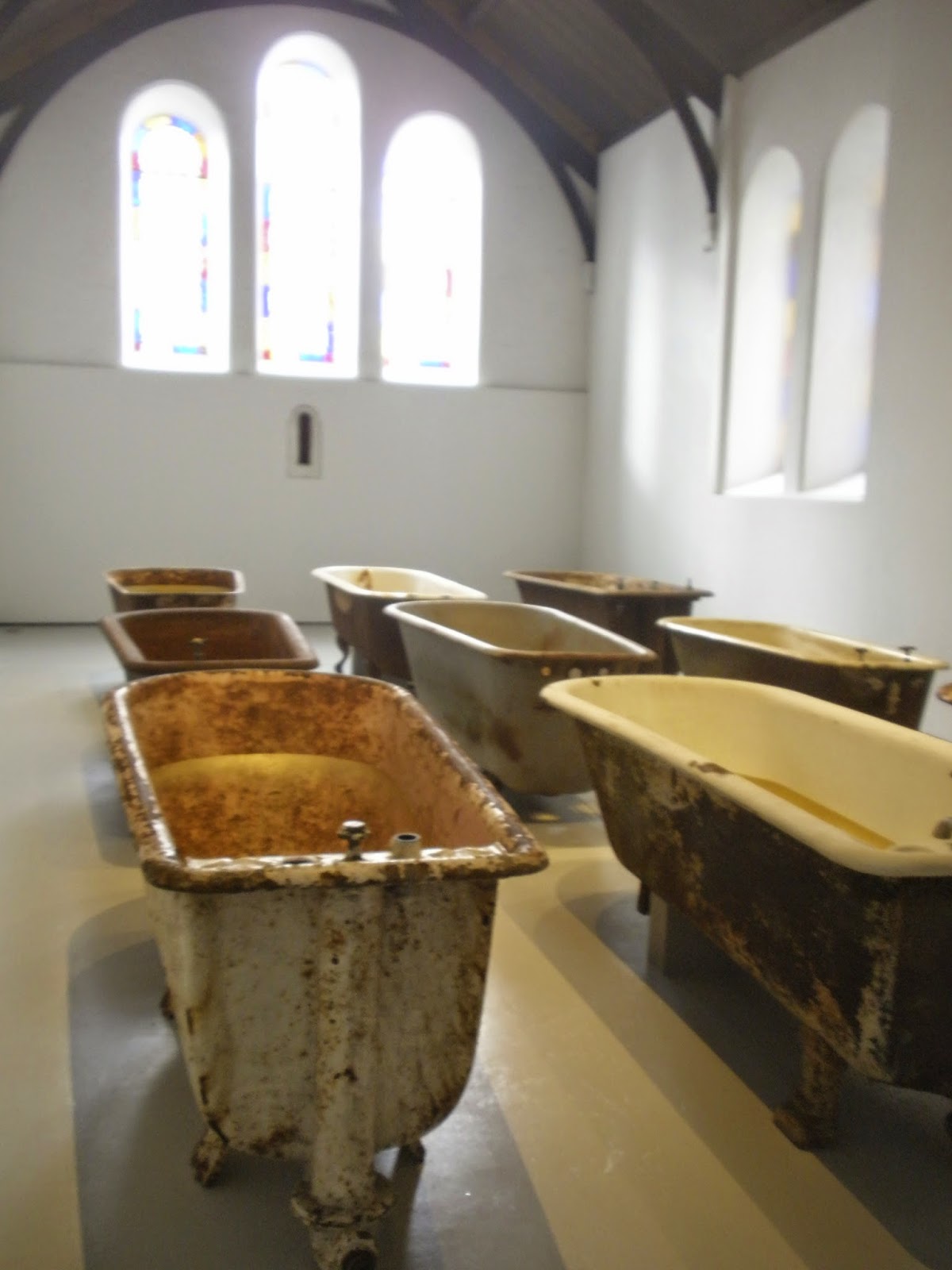 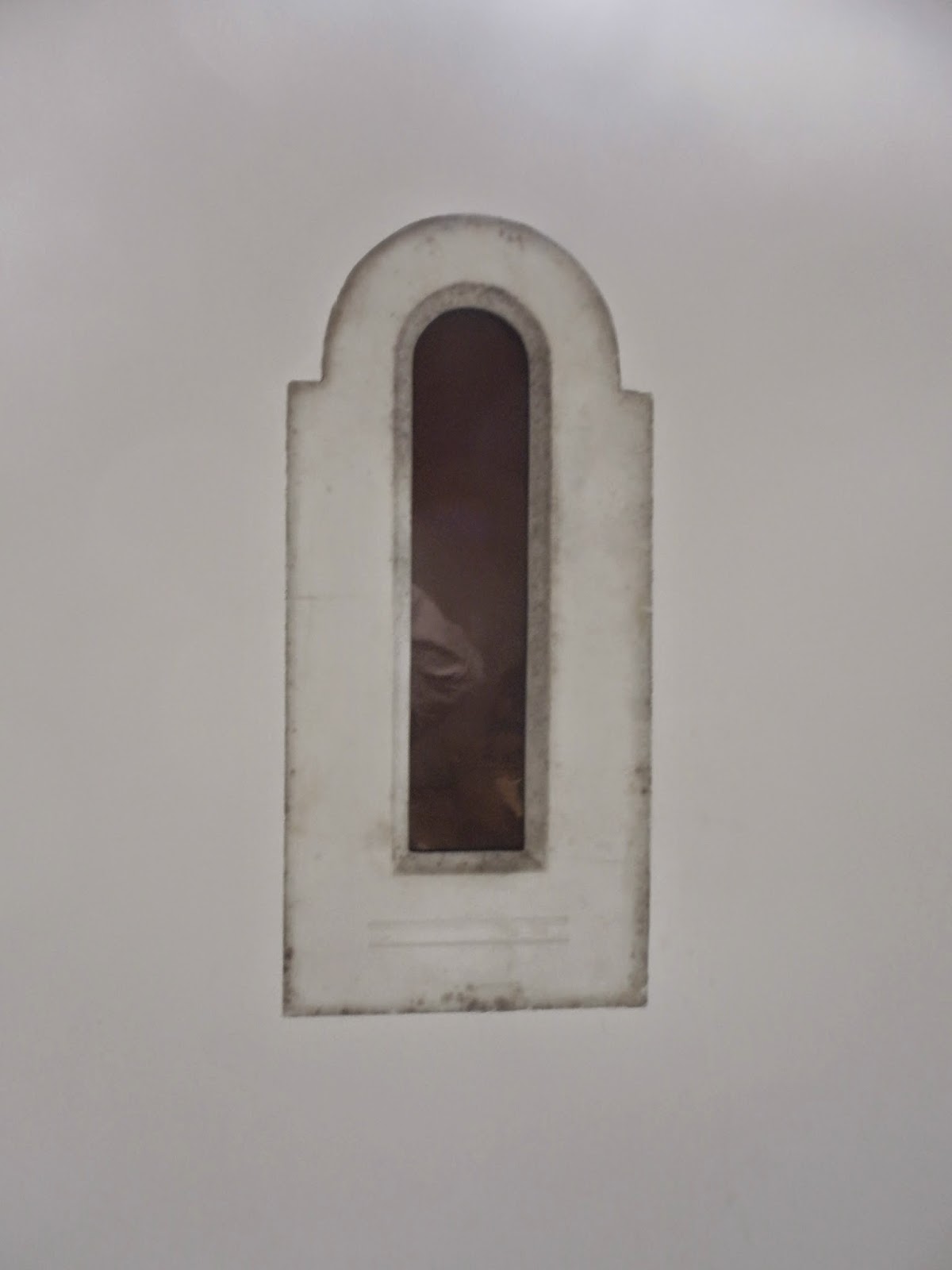 View of the bathtubs facing the small window that housed the sharks eye. 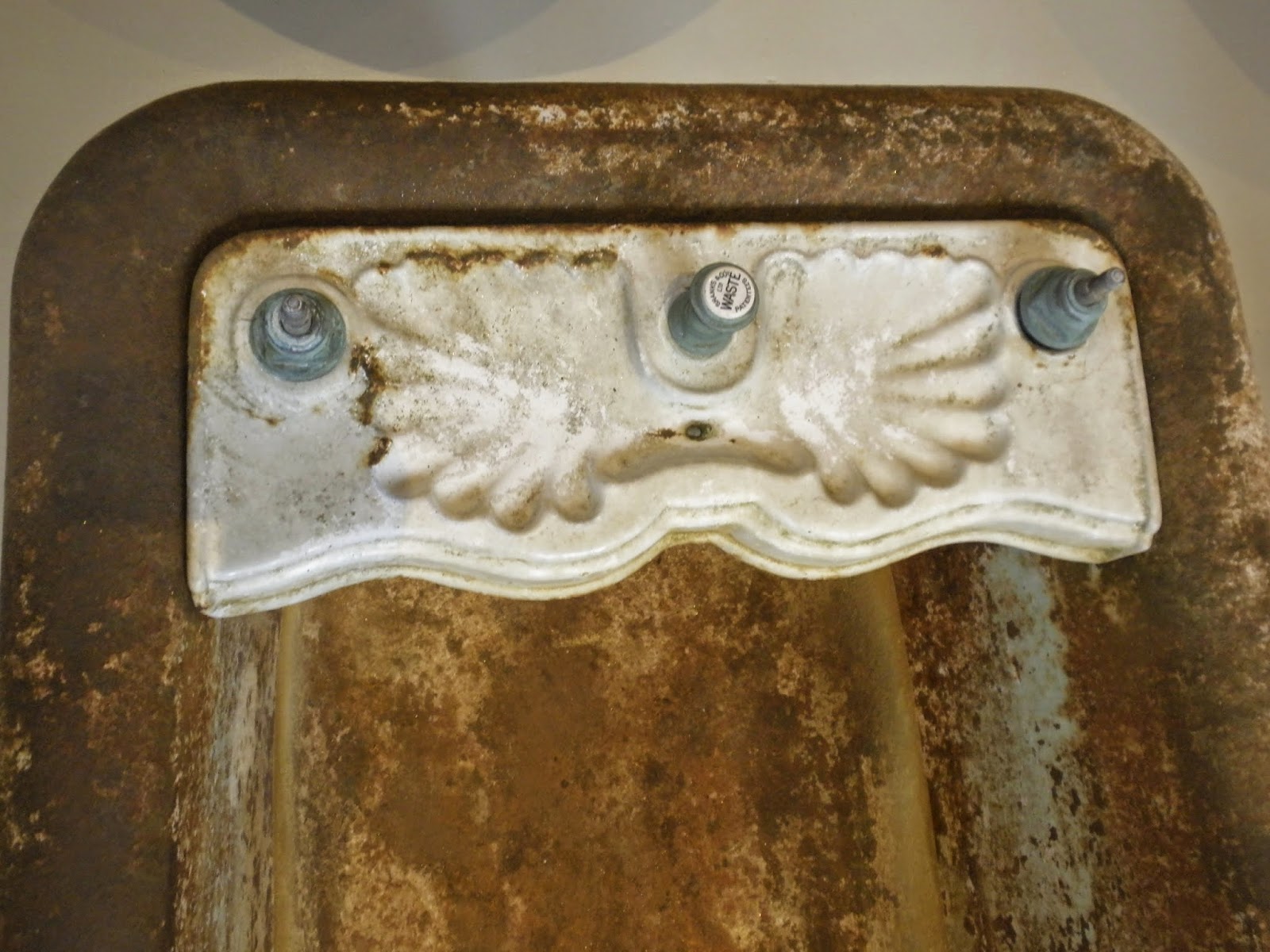 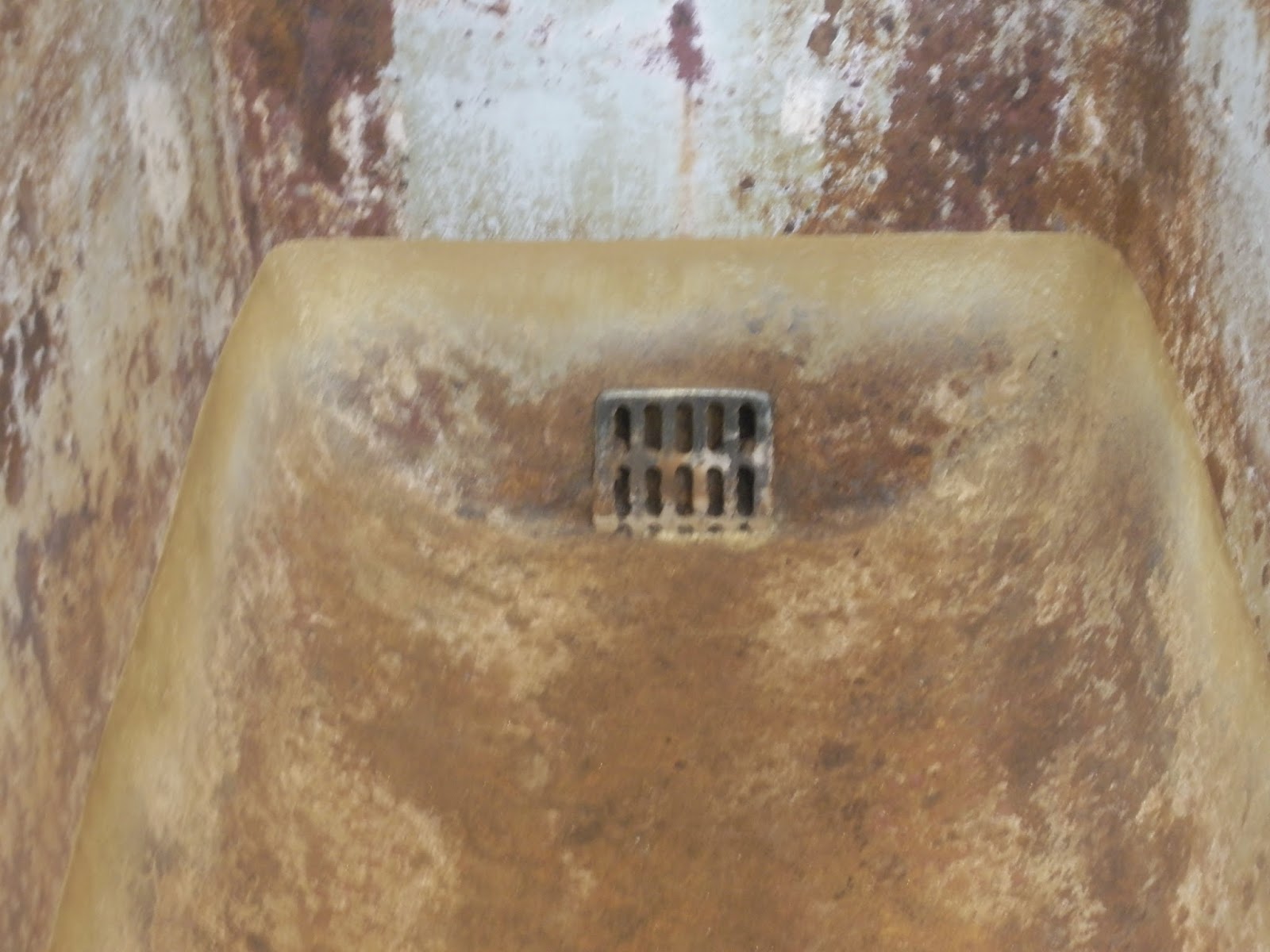 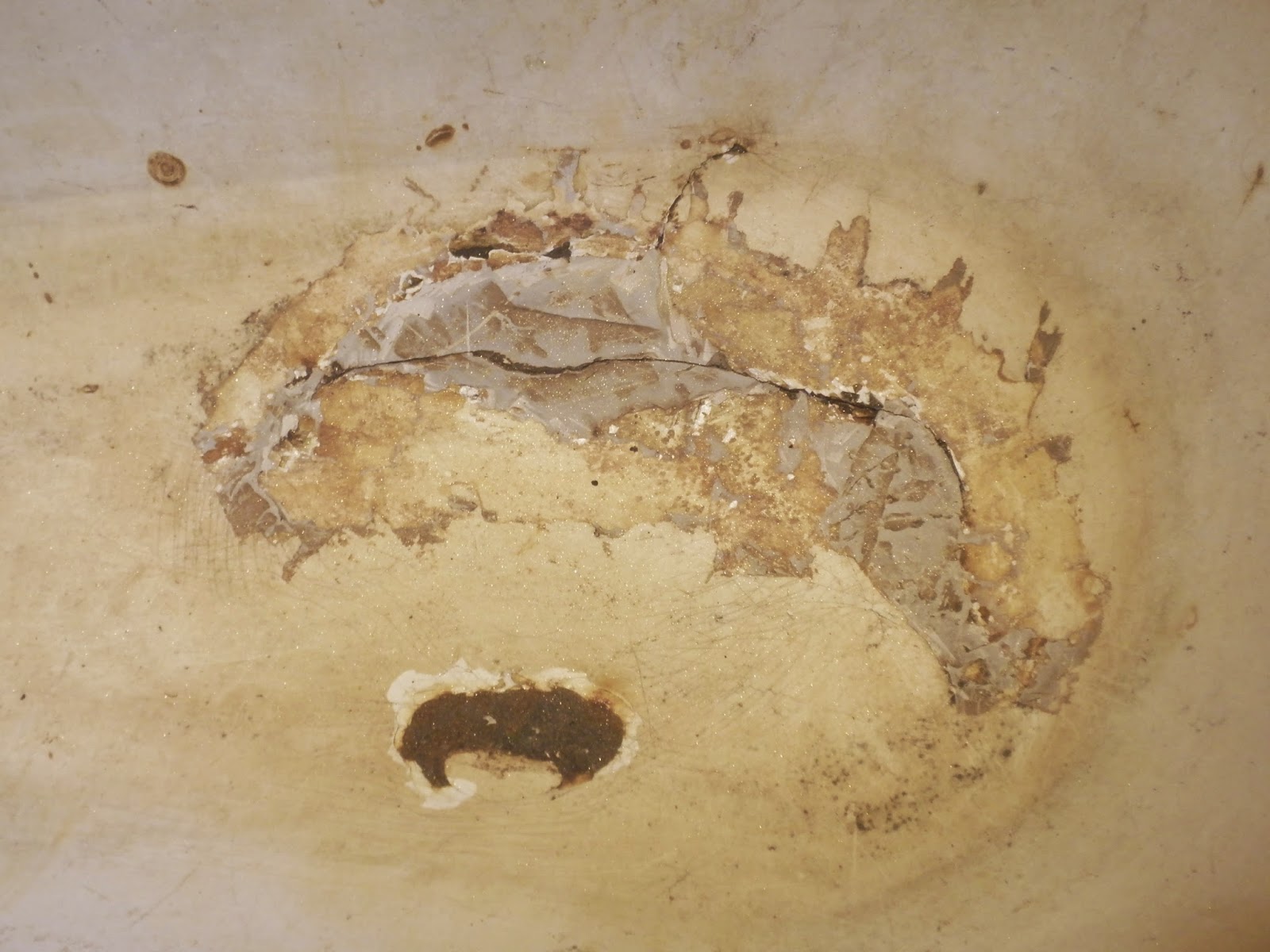 Details of the bathtubs 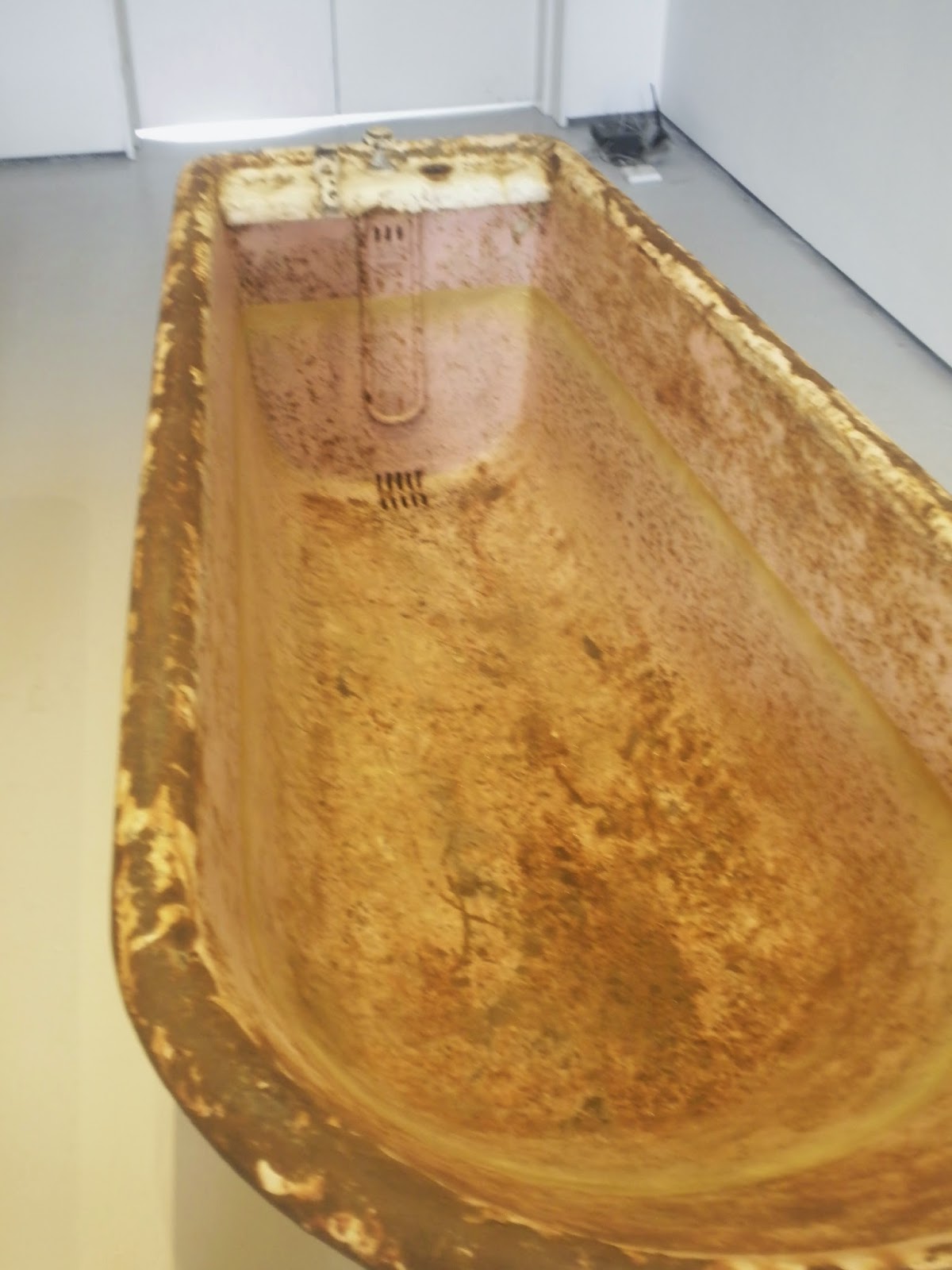 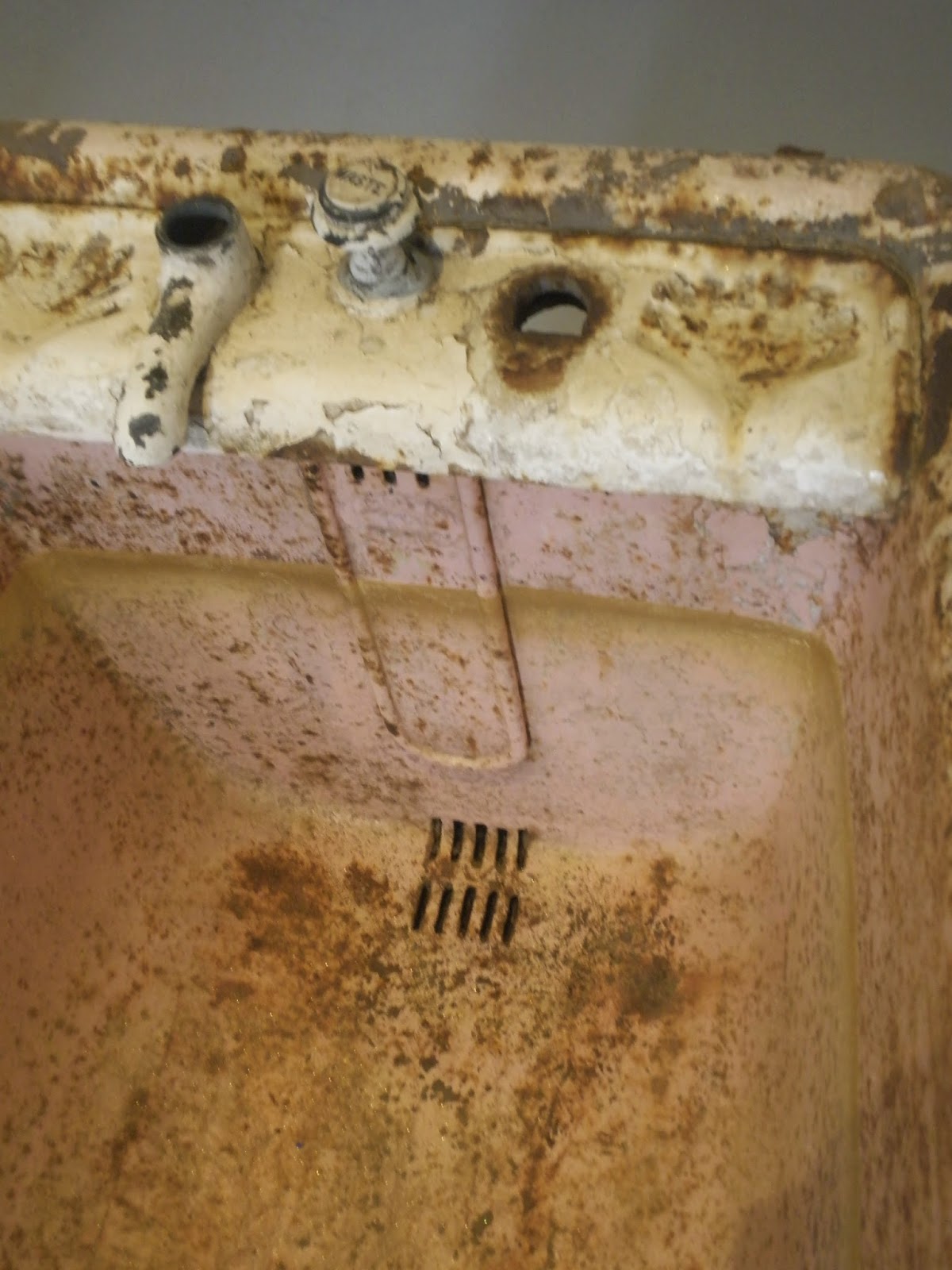 The pink tub which was one of my favourites, its hard to see in the photo but the gold and pink were really something. 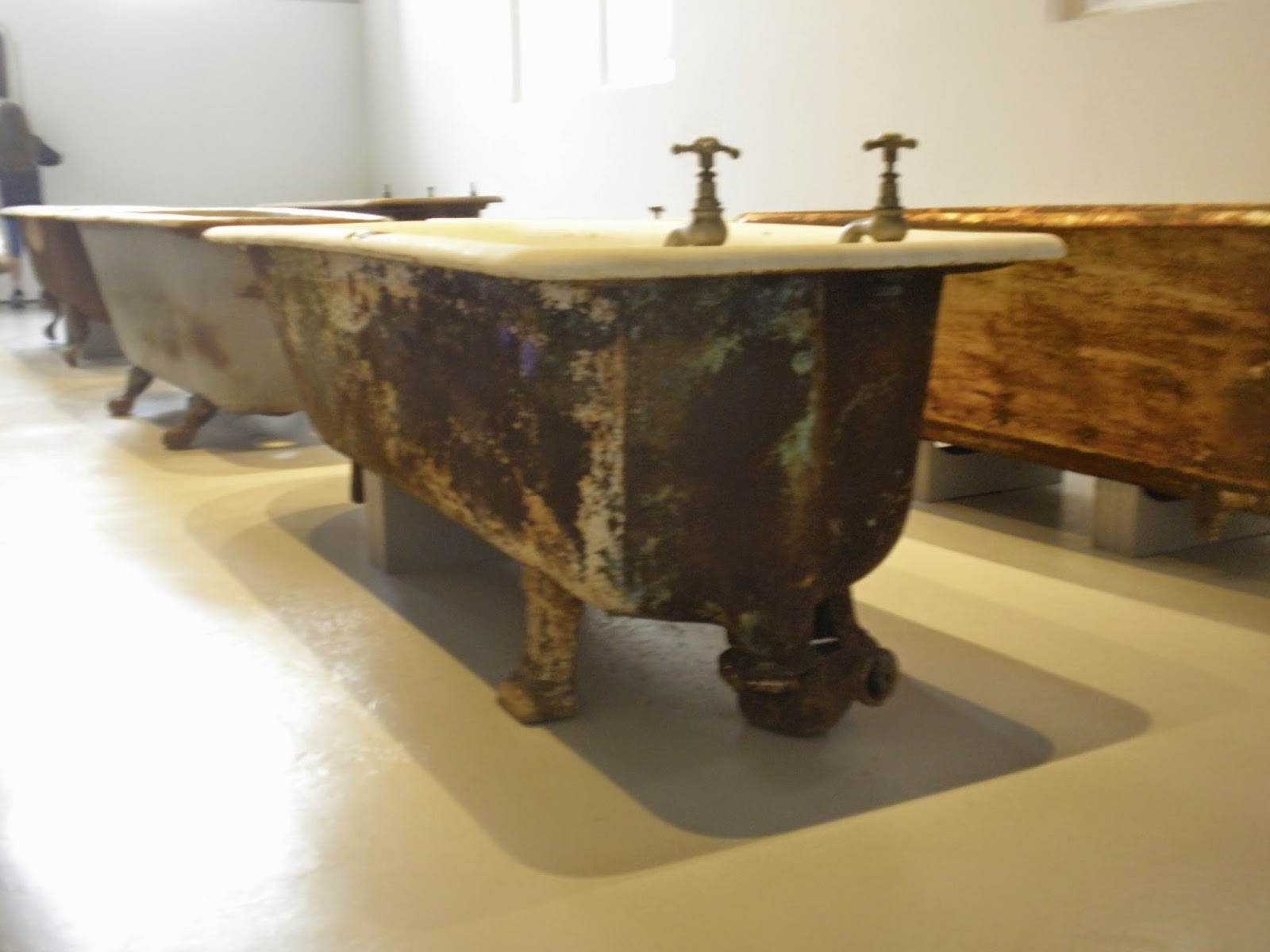 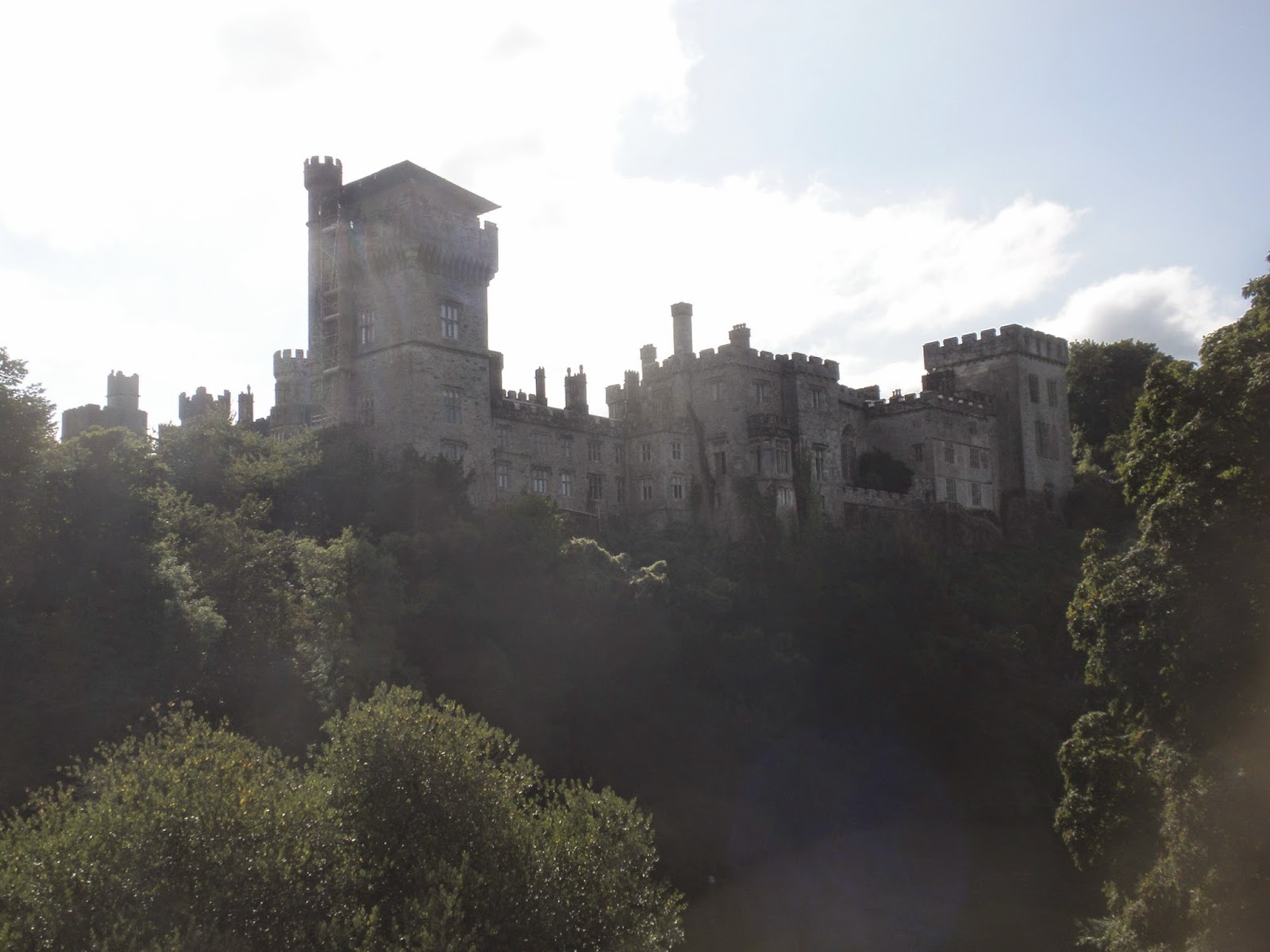 Posted by Emily Robards at 2:49 PM

Email ThisBlogThis!Share to TwitterShare to FacebookShare to Pinterest
Labels: exhibition