I have been reading a wonderful little book called, 'Daily Rituals; How Artists Work,' by Mason Curry. This little book gives a delightful insight into the daily routines of artists, writers, poets, scientists and many other creative types. You can learn so much about someone in just a page or two. It is wonderful when writings like this humanise people, allowing you to see what they are like behind their creations, their thinking, habits and humour.
One artist who I got a kick out of was Henri Matisse, a French artist. I thought I'd share his short paragraph which I found rather amusing. Also below are some images of him with cats, I love seeing a man who loves cats, it is a rare thing to see!

'Basically I enjoy everything I am never bored." Matisse told a visitor in 1941, during a tour of his studio in the south of France. After showing his guests his working space, his cages full of exotic birds, and his conservatory stocked with tropical plants, giant pumpkins and Chinese statuettes, Matisse talked about his work habits.
Do you understand now why I am never bored? For over fifty years I have not stopped working for an instant. From nine o'clock to noon, first sitting. I have lunch. Then I have a little nap and take up my brushes again at two in the afternoon until the evening. You won't believe me. On Sundays, I have to tell all sorts of tails to the models. I promise them that it's the last time I will ever beg them to come and pose on that day. Naturally I pay them double. Finally, when I sense that they are not convinced, I promise them a day off during the week. "But Monsieur Matisse," one of them answered me, "this has been going on for months and I have never had one afternoon off." Poor things! They don't understand. Nevertheless I can't sacrifice my Sundays for them merely because they have boyfriends.' 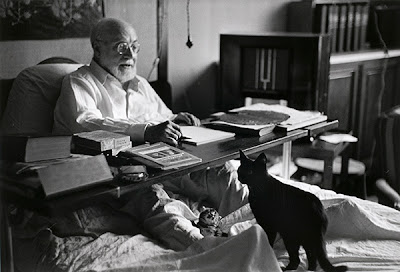 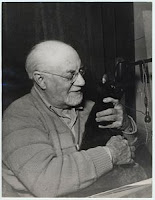 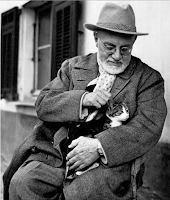 Posted by Emily Robards at 4:36 PM