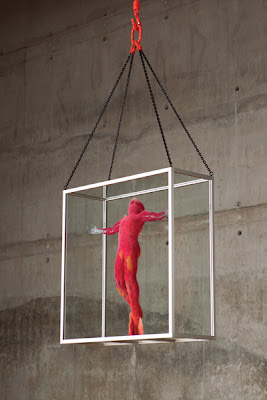 Another collaboration between bee and artist for you. When I first saw this I originally thought it was by Damien Hirst, to me it had his name written all over it.  Libertiny's work is more about manipulation and controlling a society, compared to Aganetha Dyke's work which is more about environmental concerns, she works with the bees rather than trying to control what they do. It is a really beautiful sculpture when you see it, you don't want to like it, but you are pushed over in the end.

Unbearable Lightness was created by Dutch designer Tomáš Gabzdil Libertiny. The sculpture is suspended on four chains the small cabinet is a clean-room unit that has been built from custom
aluminium profiles, glass sheets and plastic inserts, elements which are typically used in the automation industry. For this specific event, the base plate of the glass was cut with a queen restrictor mesh.Over time 40,000 worker bees were released into the case to complete a wax honeycomb structure over the figure of a martyred christ rising out of the chaos, his weight seems to be upheld by the mass strength of the swarm. The artist has managed to gain complete control over the bees, luring them to construct their hive precisely over the figure within the vitrine that is made of a laser sintered framework.
The diligent bees created a honeycomb skin over the figure before filling each cell with the honey they produced. The bees then worked to remove the honey from the cells and return it to the beehive, cleaning the martyred Christ back to the wax cells they originally created.
Libertiny's allegory engages us with his desire to manipulate and control a social wild-life entity as the means to fulfilling the final product.
The bees engage in their repetitive natural process while unknowingly creating the world's most recognised religious effigy.
The suspended closed cabinet references the strict boundaries of society where the toil of everyday duty is masked by the hope of eternal rest in an after-life promised by the believer.
The bees are programmed to work for their queen who rules her kingdom for the artist.
The viewer is able to recognise this element of manipulation of the bees while ignorant to the invisible constraints and measures imposed on our own existence. Initially, Libertiny introduced a natural red pigment into the mold which the bees spread evenly across the whole figure. The red relates to blood and flesh and is also the only colour in the visible spectrum that bees do not see. 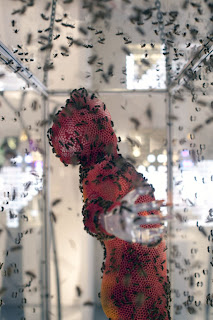 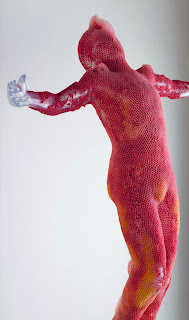 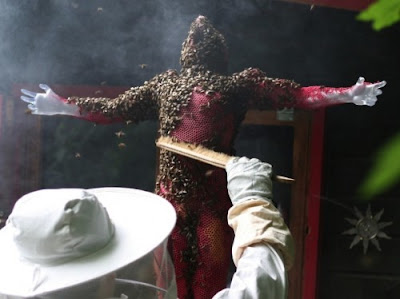