Miroslav Tichy is the first pinhole photographer I looked at. I really love his work, although many would disagree since none of his subjects know that they are having there photo taken, but I think that's what I like about the they seem more real that way. Also they may not be licked so much since they are all basically of women.
They are dreamy in a way. An image caught between sleep and dream, before your eyes are fully opened.
He makes all his pinhole cameras, out of all sorts of materials such as lou paper rolls, thread spools, rubber bands and so forth.

After studying at the Academy of Arts in Prague, Miroslav Tichý (born 1926) withdrew to a life in isolation in his hometown of Kyjov, Moravia, Czech Republic In the late 1950s he quit painting and became a distinctive Diogenes-like figure. From the end of the 1960s he began to take photographs mainly of local women, in part with cameras he made by hand. He later mounted them on hand-made frames, added finishing touches in pencil, and thus moved them from photography in the direction of drawing. The result is works of strikingly unusual formal qualities, which disregard the rules of conventional photography. They constitute a large oeuvre of poetic, dreamlike views of feminine beauty in a small town under the Czechoslovak Communist régime. 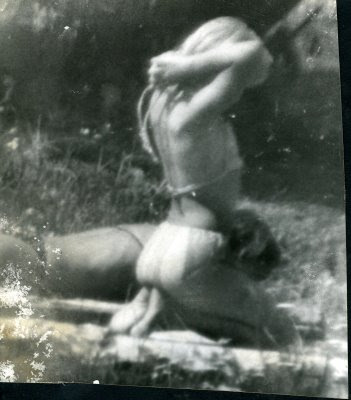 Posted by Emily Robards at 2:43 PM