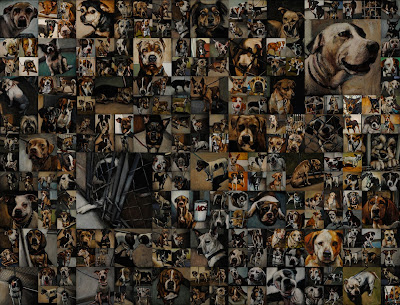 I found an amazing but sad project by Artist Mark Barone and his partner Marina Dervan. This project is helping to bring awareness to the plight shelter dogs face across America. A staggering amount of shelter dogs are killed every day. According to the Humane Society three to four million cats and dogs are killed every year. Barones project is giving the nameless millions a name and face, hopefully bringing awareness to a plight that is often hidden from the public.
The paintings will not be sold and the museum will be nonprofit, wether one will have to pay an admission fee, I don't know. Fund raising, and donations will be left to the public, and as one knows this is not always a reliable way to raise funds.
I wish them the best of luck with this project. I hope when the work finds a permanent location I will one day be able to visit it.
Please see their web-site for ways to donate and further information.

Painter Mark Barone has committed to painting 5,500 portraits of shelter dogs, using photos of the animals from shelter websites from around the country. In Barone's work, each dog has a name. Marina Dervan, (Marks partner), names the dogs that are listed only with numbers--and is titled with both its name and the date it was killed. The cumulative effect of looking at all of these portraits is staggering.
Barone is over two years into the project now, and has more than 3,500 portraits completed. Most of the dogs are painted on 12"x 12" wood panels, broken up by occasional massive 8' x 8' paintings of dogs whose story Barone feels particularly inspired by. 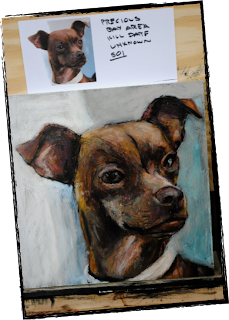 Barone's vision is both simple and extremely ambitious: 5,500 shelter dogs are killed every day in the United States, and he wanted to give that staggering number a face.

This amazing project was initiated after the death of their dog Santina, who was Barone's companion of twenty-one years. Barone was devastated, but after Dervan suggested that they adopt a new dog from a shelter, both of their lives were unexpectedly transformed.
"I thought, maybe it would be a great idea to adopt a dog, and Mark was not interested, he just wasn't ready," Dervan says. "But that didn't stop me. I was going online and looking at dogs. But instead of finding a dog, I found out all of the statistics about what was going on in terms of the amount of animals who were being killed in our shelter system. And with all of the stats and the imagery that I was looking at, the gas chambers, and a bunch of pretty awful stuff, I kept sending this to Mark, saying, 'This is awful.'"
Barone's first response was that he didn't want to see it, but he soon changed his tune. "Two days later, he said, 'I have a really clear vision of what I want to do to solve the problem.'"
The size of the project is half the size of the Sistine Chapel. The Sistine Chapel is 11,000 square feet, and this will be 5,500 square feet. If you stack the paintings 10 feet tall, it'll be two football fields long. Barone says he paints 10 dogs a day, seven days a week, and the two say that the project--which they've called "An Act of Dog"--is a full-time volunteer job for the both of them.
Barone and Dervan have ruled out selling the paintings, even in an attempt to raise money for a shelter. Instead, they intend to partner with a city or a philanthropist who wants to build a permanent home for the work, a nonprofit museum that can exist as a sustainable fundraising and public awareness solution to convert more of America's shelters into no-kill institutions.
There are still nearly 2,000 dogs to be painted, so there's time for them to find a permanent residence for the work. Dervan says that they've turned down a few cities that didn't mesh with their vision for the museum, but for shelter dogs across the country, time is running out. At the very least, Barone's paintings give those animals a face.