Born in Chiba, Japan, in 1980, Akino Kondoh is an artist and animator known for her striking, minimalist compositions, often executed with nothing more than graphite and watercolor. Kondoh graduated from Tama Art University with a BA in Graphic Design in 2003. Kondoh has exhibited internationally, earning fundings from the Japanese Agency for Cultural Affairs (Bunka-cho), the Pola Art Foundation. She was also awarded a residency in New York and received the support and collaboration of jazz musician John Zorn, who has used her art on his album covers.
In 2010, the digest version of her animation“Ladybirds' Requiem” made to the top 25 list in the biennial showcase, “YouTube Play - A Biennial of Creative Video,” Guggenheim Museum, New York. In 2000, Kondoh won the second AX Manga Newcomer's Award; and in 2002, her animation“The Evening Traveling,” in which girls dance rhythmically on a music by Toshiaki Chiku, earned her the DIGISTA Awards' Animation Division Grand Prix. 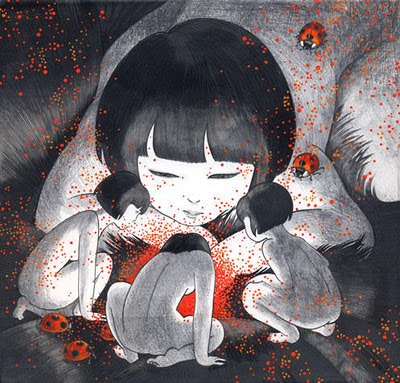 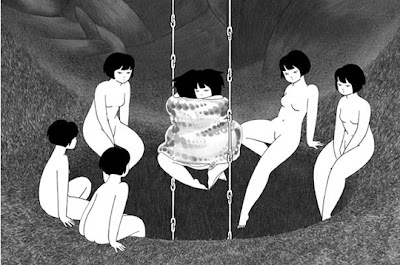 Posted by Emily Robards at 2:45 PM